The condition for generating lightning is the accumulation and polarity in the thundercloud. Scientists have carried out a large number of observations and experiments on the lightning mechanism and charge distribution of thunder-cloud. They have accumulated a lot of information and put forward various explanations. Some arguments still have debates.

There are a large number of positive and negative ions in the atmosphere. The charge distribution is uneven on the raindrop, the outermost molecules are negatively charged, the inner layer is positively charged, and the inner layer is about 0.25V higher than the outer layer. . In order to balance this potential difference, the water droplets must preferentially absorb the negative ions in the atmosphere, which causes the water droplets to gradually carry a negative charge. When the convection development begins, the lighter positive ions are gradually brought to the upper part of the cloud by the rising gas flow; while the negatively charged cloud droplets are left in the lower part due to the relatively heavy, causing the separation of positive and negative charges. 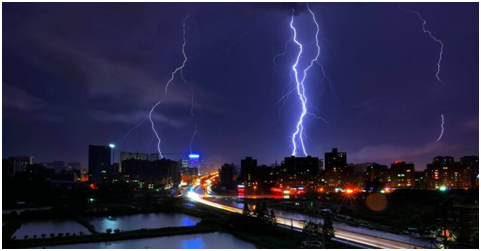 When the convection develops to a certain stage, the cloud extends into the height above the 0℃area, and there are supercooled water droplets, granules and ice crystals in the cloud. This cloud consisting of water vapor condensation of different phases.

In the tropics, there are some clouds where the entire cloud is located above 0℃. Therefore, only water droplets are contained and no solid water particles are present. This kind of cloud is called warm cloud or water cloud. Lightning can also occur in warm clouds. The thunderstorm cloud in the mid-latitude region, where the cloud is located at the 0℃ isotherm is the warm zone of the cloud. There is also a electrification process in the warm zone of the cloud.

A large number of observations show that the cloud develops into a thundercloud only when the cloud exhibits a fibrous, silky structure. Aircraft observations revealed that there are a large number of cloud particles mainly composed of ice, snow crystals, sputum particles in the thunderstorm cloud, and the accumulation of electric charge, that is the thunderstorm cloud’s rapid charging mechanism, must rely on the collision, freezing and friction of the granule growth process.